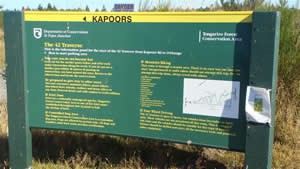 The 42 Traverse is located in the Tongariro Forest Park and follows 46km of old logging tracks beginning at Kapoors Rd on SH47 (18km north of National Park) and ending at the village of Owhango on SH4.

The ride is well known as one of the premier rides in the North Island, encountering pristine native bush, sensational views of the Central Plateau mountains of Tongariro, Ngaurahoe, and Ruapehu.

The ride has a large amount of exhilarating down hills and grinding uphill section, although predominantly downhill though with an overall descent of 570m.

The ride generally takes anything from 4-7hrs depending on your level of fitness and whether or not you are in a hurry or happy to meander at your own pace.

The track surface varies from gravel to mud, The scenery is absolutely spectacular ranging from wide views of all three volcanoes to lush unspoiled bush.

Powered by HighThemes. All rights reserved.